Q & A with the Wareham Forge

The Artisan Village puts the ‘Craft’ into the Summerfolk Music and Crafts Festival.  Recently, we asked Darrell Markewitz of the Wareham Forge about his over 20 years of Summerfolk experience.

At how many Summerfolks have you vended?

How would you describe your experience at Summerfolk to another vendor who has never been?

The atmosphere at Summerfolk is far more relaxed than a typical ‘just sales’ event. There are a large number of people attending who come for all of the three days, plus a large number who actually camp on site for the whole event. This means a lot of ‘browsing’, people typically will make several returns to an individual booth, after viewing the entire selection of artistic work available, before making a purchase. This also goes for people who return year after year, watching your work as it develops. Generally I feel that although this does mean more effort on my part, it does make for a ‘better educated’ customer.

The very relaxed ‘old hippie’ tone to the event, coupled with this return flow, does mean that booth security has never, ever, been a concern for me personally. If you wander off yourself for a half hour (to see a music set), nothing will be missing and any potential customers know they can just catch you later.

Balanced against this are the length of the working days. Typically 12 plus hours – longer when you consider the set up Friday and tear down Sunday.

How does Summerfolk compare to other craft and music festivals you attend?

Honestly, I have cut back on other sales events in the last decade.

Partially because of the huge work involved in transporting and setting up the booth structure. My own work has been come more complex over the decades – with an increase in pricing related to this quality and scale increase. I don’t make $20 candle holders any more, and consider my presentation at Summerfolk more of a gallery setting – than any specific attempt to generate sales. This year Summerfolk is the *only* retail sales event that I will be taking part in.

One significant part of Summerfolk is distinctive : the Artisan Gallery.

The original intent of this was to allow individual artists to display work well beyond the scope of typical sales items. Supporting this effort with cash prizes has proved especially effective in encouraging this additional effort to produce more elaborate objects by the artists.

(I’ve won a good number of these over the years, and personally I can tell you this recognition has been very important in personally encouraging my own work.)

What is your favourite Summerfolk memory?

For me it comes down to the people.

There are a group of regional artisans who over the years I have come to consider my peers. Many of these people I only see at Summerfolk, but even still there is a warmth of seeing ‘old friends’ every year.

This extends to the ‘customers’ as well. I do have some regulars who have in effect been ‘collecting’ my work over the years.

Personally, my many years beside Jim MacNamara has had a major impact on my direction of work and outlook to the ‘way of the artist’. Over the years, the line between our individual work has blurred, with echoes of the influence on each other (or at least Jim’s on me) showing. Not to mention general inspired craziness. At its height, the two us where actually showing up early Thursday morning and hauling in several tons of rock to create the large garden style displays which themselves became one of the many Summerfolk traditions.

What should people know about your art?

I am distinctive in the depth of historical research that goes behind the work people see displayed at Summerfolk. Since 2001, I have been involved in a series of experimental archaeology projects, recovering lost methods of actually smelting metallic iron from raw ores, based on Northern European ancient technologies. This makes Wareham the centre for this research, most certainly unique in Canada, and perhaps the primary site in all of North America.

The bloomery iron produced by these ancient methods is a distinctive material, with properties different than modern industrial steels. My effort to create objects revealing the forms and textures of bloomery iron will continue with new work presented at Summerfolk this year. 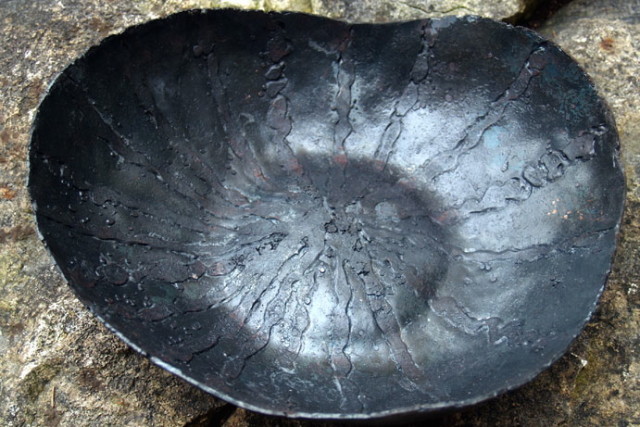 Visit the Wareham Forge online at http://www.warehamforge.ca/ and in person at Summerfolk40