If you visit Tanika Charles’ page on summerfolk.org, you’ll hear a track called Soul Run. It’s lively, with a beat and an exuberance that makes you want to leap on stage and sing the backing vocals. The track also sounds like hope, which is interesting because the real life story behind the song belies the groove.

Charles was living outside Edmonton in an unhealthy relationship and it was time to get out. Grabbing the only vehicle available to make a break, she didn’t get far. It was a manual transmission and she had only ever driven an automatic. But it sometimes happens that once the first step is taken, there’s no stopping.

That was the beginning of what Tanika Charles calls her soul run. It took her from a northern Alberta farm to the centre of the Toronto music scene that has embraced her with all its heart.

When Tanika left Edmonton, she had no musical background, except for a well-developed love for her dad’s jazz record collection, Stevie Wonder and Bjork. She thought maybe comedy would be her meal ticket but auditioned for work as a background singer. As a backing vocalist with Bedouin Soundclash for two years and touring with Emmanuel Jal and Macy Gray, her exuberance, the crystal quality of her singing and her presence, made her a valued member of those groups.

It’s a time-honoured tradition in the world of soul and blues that you learn your chops in other people’s bands. It takes courage, though, to step out of that role and strike out on your own. Applying all that was learned on the road and in the studio to build her own career and her own band, in the best sense of the word, Tanika invented herself.

Starting the second lap of the soul run in 2010, Tanika released her first EP What! What? What!? She was among the headline performers at the prestigious Women in Blues concert at Toronto’s Massey Hall in 2012. In 2015, two singles were released as a teaser for a full-length project. Both charted well on CBC and, by May 2016, Tanika had dropped her debut CD. It was a hit. Soul Run was nominated for a Juno award in the R&B/Soul category where Tanika was the only woman nominated.

Now, on the third lap, she had a cross-Canada tour—not an easy thing to arrange on the release of the disc, dipped her toe in the world of theatre with the show Freedom Singer and is currently on a month long tour in Europe—not bad for someone who couldn’t drive a stick!

Samantha Martin also has running on her mind. Her 2018 release, Run to Me, is a blues tour de force—music with a backbone. But make no mistake, from the writing to the arrangements, everything on this CD supports the unshakeable pillar that is Samantha Martin’s voice. If harnessed, it could power a small city. It’s not just smoky—it’s a three-alarm fire. 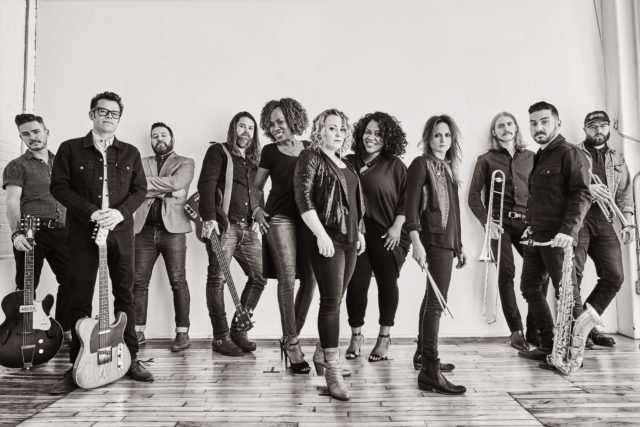 Since Samantha and Delta Sugar were last at Summerfolk, their debut album Send the Nightingale earned 4 Maple Blues nominations and they were chosen to represent Toronto at the International Blues challenge in Memphis. But we all know that she was really in Memphis representing the Grey Bruce.

Samantha was born in Edmonton, but her family has deep roots on the peninsula. At various stages in her life, she has found herself living on the shores of Georgian Bay where she has had a lot of formative musical relationships, notably with Trevor and Tara MacKenzie.

Her first EP was recorded at Trev’s studio with a full-length solo CD following in 2008. Four years later, Sam like Tanika, decided to form a band. Samantha Martin and the Haggard was a romp through blues, gospel, country and early rock and roll.

By 2015, Martin had sharpened her focus—Samantha Martin and Delta Sugar was born. The blues juggernaut owes its strength to the tripod of Martin, guitarist Mikey McCallum and drummer Dani Nash. It owes its sweetness to the unadulterated gospel-tinged, neuron-tingling magic of Samantha’s “co-vocalists,” Sherie Marshall and newest full time member Mwansa Mwansa. And just when you thought that was enough, along come the keyboards and the horn section. It’s a mighty sound.

Samantha actually has a couple of voices. The second one finds its way from pen to paper. Singing comes naturally to some folks, but there are no natural writers. It’s a craft that has to be worked on. Sam’s voice wouldn’t make sense without strong songs to sing so she’s has been sharpening her focus there as well. That voice, the one that actually writes the songs, has become as strong as the other one we hear on the recordings. The latest crop of tunes are spartan and heartfelt. Pulling no punches, they are as honest as her voice.

Whether you’re on a soul run, or you are running to Samantha Martin, you’ll find the finish line at the Summerfolk Music and Crafts Festival. It’s our 43rd year at Kelso Beach Park and the dates are August 17, 18, 19. Information about tickets, performers and much more can be found at summerfolk.org.