James Keelaghan wrote a series of articles for the Owen Sound Sun Times last year as part of the lead up to Summerfolk.

When I was hired to become the new Artistic Director of Summerfolk, the first thing that greeted me was a large box of CDs – a big cardboard container packed with 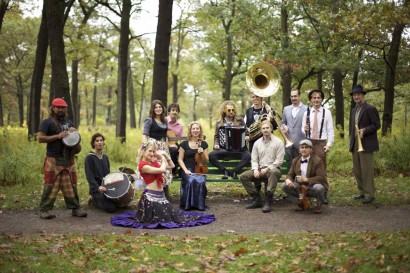 promotional materials from those wishing to play Summerfolk.  They were submissions that had been piling up between Richard Knechtel’s departure and when I signed on.

There were hundreds of CDs.  I felt I had to listen to them all, an occasion that made for an interesting December at my house in downtown Perth.

By some strange geologic process, certain discs kept rising to the top of the pile.  But one that broke the surface most often was by a group named the Lemon Bucket Orkestra.  It was heartfelt, rollicking, breathtaking music from the Balkans and the Ukraine, tinged with strains of klezmer and gypsy, all served up with joyous abandon

I had never heard of the group.  That bothered me.  How did I miss out on this musical experience?  A Toronto friend surely would have said to me, “Oh, by the way, did you hear about this insanely great Balkan klezmer and gypsy party band?” I began to think, perhaps, they weren’t real but then I discovered this fantastic video on YouTube, plus a good looking website.

I phoned the number on the contact sheet, holding a conversation with Mark Marczyk.  He assured me that Lemon Bucket was for real and that it was him that I was seeing on the videos, playing fiddle.  He let me know that LBO could arrive with anywhere from a five to a twelve piece band, the culmination of a Toronto musical co-op.

Just as I hung up, the phone rang.  It was a colleague from Toronto, letting me know about this fantastic band he had just seen on the past weekend.  Quite unexpectedly, the next three phone calls I handled all raved about LBO.  Was it fate or a clever viral promotional assault?

In the long run, I decided it was fate!  I believe that LBO was made for Summerfolk and that Summerfolk was made for them.  I phoned Mark Marczyk back, letting him know that I wanted the full band and for the whole weekend.

There is great skill and virtuosity in the music they play – there is no pretense.  LBO is as comfortable performing their music on city street corners as they are on a large stage before a roaring crowd.  The YouTube video presents them on board an airplane, stranded on a runway.  To keep the passengers and crew’s spirits up, they made music, music that makes life better and more enjoyable, especially for tired, hot airplane travellers.

Tangi Ropers brings a Breton-accented accordian sound while Mike Romaniac adds reedy texture with the sopilka, a traditional Ukrainian wooden flute.  Anastasia Baczynskyj throws her head back, singing from a place very deep within herself.  The horns (alto sax, clarinet, trombone, flugelhorn, and sousaphone) and the percussion section put it all into overdrive.  On top of it all, out whirls dancer Stephanie Woloshyn.

Without a doubt, the Lemon Bucket Orkestra will have you on your feet, dancing and singing.  If they have their way, you will end up on the same Balkan binge that I have enjoyed for the past six months.

There is endless debate among festival directors concerning booking headliners.  Do you really need them to bring a larger audience to your event?  Do you need them to boost ticket sales?

These are totally relevant questions.  Still, speaking, not just as an AD, but a lover of music and a frequent audience member, I go to festivals largely to hear those people and bands to which I have never been exposed.  A particular headliner may well attract my attention but really, I go, hoping to be surprised.   And then I come away with CDs that I never thought I would end up from musical acts I never knew existed.

The Lemon Bucket Orkestra has been the soundtrack of my past six months.  I am totally excited that they are coming to Summerfolk – and I can guarantee our audience that they are going to love them..

More information can be found at www.summerfolk.org.  You can listen and read about LBO at their website at www.lemonbucket.com.