James Keelaghan wrote a series of articles for the Owen Sound Sun Times last year as part of the lead up to Summerfolk.

Something in the Winter

In 2001 my wife and I decided to move from my hometown of Calgary to Winnipeg. We had a desire to live someplace different. Winnipeg was that, for sure.

It’s a city with a great history-epic battles, wave upon wave of immigration larger than life characters. It has the largest urban concentration of First Nation’s people of any Canadian city. It sits at the junction of two rivers, the Red and the Assinaboine, and two of Canada’s greatest geographies, the Shield and the Prairies.
Musically it sits at the place were all roads meet.
Every February, in the darkest coldest part of winter we looked forward to Festival du Voyageur. It was always high adventure, venturing out in 40 below to St Boniface to drink caribou ( the incredibly powerful fortified mulled wine) and listen to Franco-Manitoban music. While it wasn’t a trip to the tropics, it did break the back of winter for us.

In 2008 a songwriting student of mine, Vanessa Kuzina, told me that she three other local musicians had formed an all female old time band. Like all good Manitoba bands, Oh My Darling came together during a particularly frosty winter. Alison De Groot ( banjo), Marie Josée Dandeneau ( Upright Bass), 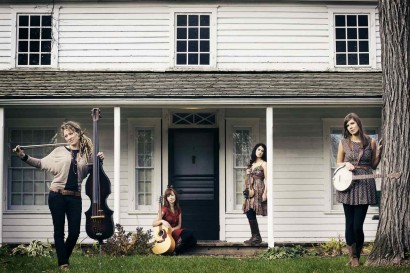 Rosalyn Dennet (fiddle) and Vanessa (Guitar) took to the stage at Festival that year for the first time and have never looked back.

Their music is a blend of bluegrass, Appalachian, Franco-Manitoban and old time. The original songs blend seamlessly with the traditional tunes. Over top of it all is that unique prairie accent and sense of place.

The Crooked Brothers are different fish, but the same kettle.In their press kit there’s a familiar reference. Their first CD, it says, was “recorded in a small cabin over a cold Manitoban winter.”
Manitoba should probably package that winter and send it to musicians in other parts of the country.
I don’t know the weather that led to their latest CD, but the first time I heard the track “17 Horses” I was hooked. It’s swampy and wide open.The vocals are low and rumbling, the percussion played by banging on an old piece of railway iron.
The Crooked Brothers are Jesse Matas, Darwin Baker and Matt Foster. They are kindred spirits. Like Oh My darling, they are all accomplished solo players in their own right. They have exceeded the sum of their parts and managed to forge a distinctive band sound. 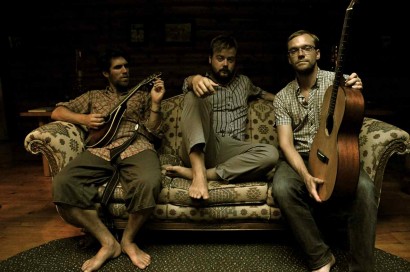 You never know where they are going to take you next-they are hard to classify. The banjo, harmonica, dobro and mandolin give their music a roots feel, but the lyric and the melody spin you off into another dimension. They take you to that dark mid-February of the soul where we nurse our regrets and hone our desires.

I suspect that the long lonely Manitoba winter might have had something to do with why Al Simmons is the way he is. There’s no mention of it on his web site, but he may just take it as a given.

In many ways Al is like a real life muppet. He’s got their sense of vaudeville and musical comedy. He’s got the irresistibly corny humour and a body that defies the law of gravity. It’s his DNA that’s pulling his strings though.
He claims he was genetically engineered for comedy. He has lanky legs, a rubber face and large flipper like feet-all of which combine to make him the reigning sovereign of sight gags. I’ve seen him recreate the entire opening of 2001 in pantomime. I’ve seen him wearing a bathtub while playing a bath-brush ukelele. 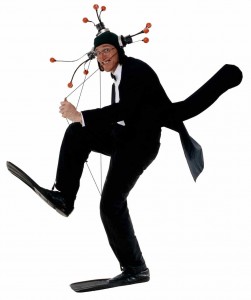 He is an underrated musician and songwriter-the fastest pun in the West.
I mean that in a good way, because Al’s comedy for all its madness, is gentle. Its comedy in the tradition of Victor Borge. There’s never a laugh at anyone else’s expense-no one gets hurt, no one is insulted. He does kids shows and adult shows but the distinction is strictly academic. I’d take any one of any age to see whatever he is doing. Al makes me laugh. What more do you need to say about a comedian?

The thing my wife and I loved most about Winnipeg was that music is part of the fabric of the life there.We loved that the fact that there was still live music in our local pizza joint, that musicians were more likely to jam for fun than rehearse for a gig.

I can guarantee it won’t be forty below during Summerfest, but we hope you’ll enjoy this taste of Manitoba nonetheless

You’ll find Al Simmons at www.alsimmons.com
Oh My Darling at www.ohmydarling.ca
The Crooked Brothers at www.crookedbrothers.com

Tickets and information for Summerfolk can be found at
www.summerfolk.org