Hannah Shira Naiman’s CD rose to the top of the pile that came from the Folk Music Ontario conference last October. There were some really great original tunes, interspersed with traditional material. I wondered where she’d found so many traditional tunes that were new to me. When I got round to reading the liner notes I was pleased to discover that she wrote them.

The songs are solidly in the Appalachian/Old Time tradition. The melodies come from someone who has an intimate knowledge of the classic ballads and tunes. It helps that she was raised in a musical family in Toronto-both her parents are themselves respected players. 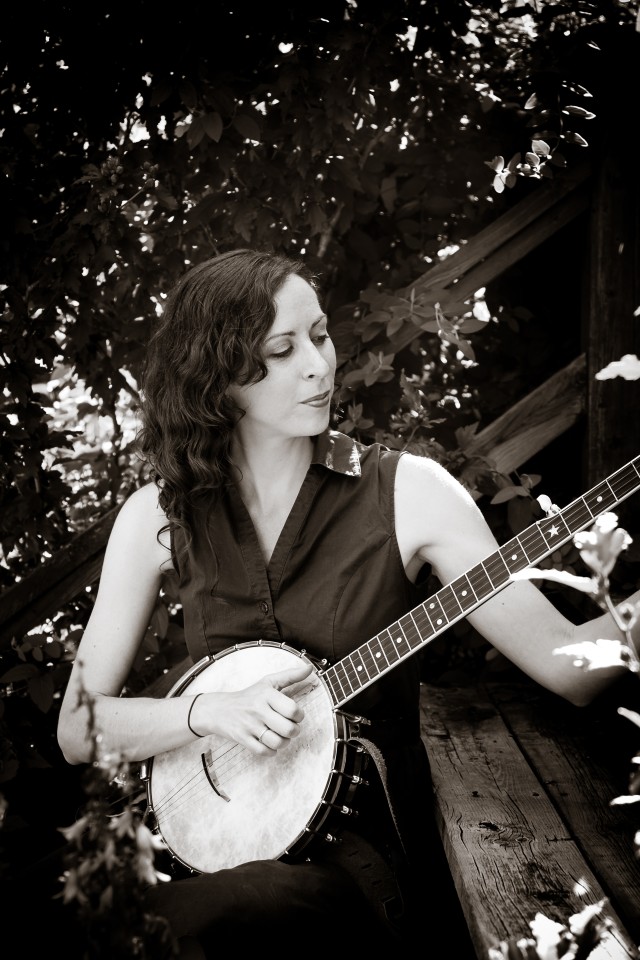 She has a willowy voice and gentle hand on the claw hammer banjo. She’s a joy to listen to.

I hired Hannah because I loved the cd and the songs. I also wanted to have her pitch in with our dance program. She’s an accomplished dancer herself, you can hear some foot percussion on the cd. She’s also a dance caller.

There’s been a revival of contra and square dance brewing in Toronto. Hannah is one of the go to callers at the popular Hog Town Hoedown. Contra dances, like square dances, are done with the help of a caller. That’s where Hannah comes in.  She teaches each dance before it begins in a ‘walk through’.  Once the dancers have done the walk through, the caller will strike up the band, and she/he will continue to prompt the dance until it looks like everyone is flowing along on their own.

As we talked about dance programming, she suggested that she could call and teach the dances, sing her original tunes and put together a band that could handle both. She’s bringing some great players from Toronto. Her dad, Arnie Naiman on banjo, Rachel Melas ( from Betty and the Bobs) on Bass, and Rosalyn Dennett ( Oh my Darlin) on violin.

I mentioned some of the other people coming to the festival and she suggested that maybe there was an opportunity to put together an All star band for our Saturday night contra dance band. Why not said I. So, over the course of the Saturday night dance, the band will be joined by a parade of some of the best trad players in North America-Brittany Haas (Crooked Still), Eli West, Ann Downey and Ian Rob from Finest Kind and the incomparable  Bruce Molsky.

Bruce Molsky should be made a UNESCO World Heritage site. He has a deep, wide catalogue of American songs and tunes. He is the undoubted master Appalachian fiddler of his generation. When you listen to Molsky you listen to history.

Guitar, banjo, fiddle and a classic reedy voice are Molsky’s hallmarks. They are deployed on the staggering library of tunes and songs stored in his head. He’s a natural folklorist, sifting though songs learned from field recordings, festivals, and old-timers.

He was raised in the Bronx and had a brief flirtation with bluegrass when he was younger. He became devoted to Appalachian and Old Time music when he was studying to be an engineer at Cornell. He was attracted by the music’s drive and power, but also by its social and communal side.

“Community is integral to the music,” Molsky explains. “Most of us started playing in a social context. The music is all about pulse and heartbeat-everybody has that, it’s just expressed a little differently in different places. There’s always common ground that we can find.”

His first solo album, Lost Boy,  was released in 1996. It wasn’t until 3 years later, though that he finally gave up his day job and turned to music full time.

His latest disc, 2013’s If It Ain’t Here When I Get Back, finds Molsky not only self producing, but also playing all the instruments.

His other musical influences are on display as well. There’s Bimini Gal, which he learned from  an LP that featured Bahamian guitarist Joseph Spence. Or the playful instrumental Growling Old Man and Grumbling Old Woman a traditional Métis fiddle tune learned from field recordings of the Ojibwe people in Western Manitoba.

He’s got a quiet version of charisma. You can find him at fiddle camps, music schools and festivals where younger players flock to him to soak up technique or repertoire, or both.

Hannah Shira Naiman and Bruce Molsky both possess an “I’ll sleep when I”m dead” attitude at music festivals. They are two of the fine musicians you’ll find in our roster of over 40 acts at this year’s Summerfolk Music and Crafts Festival. The gates of the festival open at 4 Pm on the 15th of August. The contra dance  with our Summerfolk All star Contra Band happens at 7:30 Saturday August 16th. Tickets, info and schedules can be found at summerfolk.org or by phoning the office at 519-371-2995. Come and catch the sound of summer!