Tonight, we are kicking off the festival with a Birthday Bash in the new Down by the Bay tent. 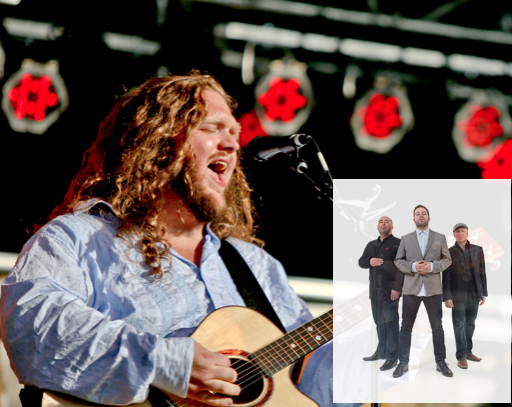 Monkey Junk will kick things off at 8 PM ,with Matt Andersen headlining at 9 PM. These are two powerhouse acts. MonkeyJunk plays a swampy, funky brand of blues. It’s the kind of music that turns your backbone to jelly. The riffs are little earworms played with the kind of precision that can only come from a close and longtime musical camaraderie.

Matt Andersen never ceases to amaze. He’s a powerful presence. When he digs in on his guitar, a hammer like right hand drives the song. The head is thrown back and the voice explosive. When he plays a ballad, it’s as gentle as a southern rain. What gives Matt Andersen his power is simplicity. Matt is one of the most requested artists by Summerfolk audiences and it’s fitting that he’s here to launch us on our next 40 years.

I’ve been in and out of Kelso Beech Park a lot this week. I am amazed, as always, at how quickly the park is transformed. The million and one details that make a festival happen are being tended to.  Tents have been going up, stages are being built. I walk around the site and imagine the things that are about to happen.

And there is a lot that is going to happen. Eighteen concert slots on the Amphitheatre stage. On Friday night, Montreal’s The Bombadils will start the music on the Amphitheatre stage. Over the next three nights, seventeen more acts will play that stage including-the infectiously poppy Joel Plaskett, the high, lonesome voice of Claire Lynch, the acoustic fusion of The Duhks and the dance rhythms of Delhi 2 Dublin.

On Friday, at the Down by the Bay stage, the entertainment picks up where Matt Andersen left off. Our busiest venue, 25 different workshops and concerts happen under its canvas for the weekend. Sessions like Sunday’s Groove Summit with Samantha Martin and Delta Sugar, The MacKenzie Blues Band and Whitehorse take jamming to a whole new level. The Lovelocks, who took the Boots and Hearts festival by storm, will play the stage twice, once in a session with local heroes, Sons of Perry and their own concert slot on Saturday Night.

As raucous as DBTB can be, the Wine Bar provides a remarkably intimate setting for a large festival. Its focus is more on fitness than flash, but it gives a rare chance to see a powerhouse band like Digging Roots in a near acoustic setting.

In between the DBTB and the Wine Bar, you’ll find 17 food vendors. There are a  lot of flavours there. You’ll also pass the Look up Theatre and Vita Twirlin Diva who are offering classes on the circus arts and the spinning arts. That is also where the Saturday night fire show is going to happen.

Forty-Eight handpicked Artisans line either side of the walkway down to the beach. This is the heart of the crafts in the Summerfolk Music and Crafts Festival. Jewellery, pottery, one of a kind clothing, were chosen from over 300 entries. Over the weekend, there is a juried show and people’s choice awards.

That’s just the north half of the park…

Starting at the main gate and heading south you can follow the Owen Sound Public Library’s storybook walk- a literary trail using a children’s story by Jill Barber, “Music is for Everyone”

Keep going past the wine bar,past the Anniversary and General Store tents to your left and you’ll come to the Gazebo stage. On Sunday, the workshop with Jojo Worthington, Shred Kelly and Steve Poltz is going to be catchy, yet surreal workshop. On Saturday afternoon, there’ll be a special kid’s concert on the Gazebo stage with Trout Fishing in America and our own Dickie Bird (Richard Knectel).

At the end of the children’s concert , if you were a kid, you could visit the children’s village. That’s where they will be decorating the 32 foot long dragon that leads the Kid’s parade. You could also try some of the amazing things that Elephant Thoughts brings our way—reptiles and giant bubbles to name a couple.

Rejoin your elder unit at Todd’s Musical petting zoo. Todd Crowley visits us yearly from Ohio and brings a trailer load of over 200 instruments. They are there for the weekend, laid out and waiting for you to pick up and experiment.

Venture over the hill to our dance stage. You’ll find a large airy tent, a beautiful dance floor and all sorts of opportunities to learn, contra, clog step and more-and yes we, have some free-style dance as well. The jewel of the stage, though, is the Saturday Night Contra Dance with our Summerfolk All-Stars—a pick up band with some of the best traditional musicians on the planet.

I finish my walk and I’m even more in awe of the hard work of the hundreds of volunteers now swarming the site. They’ve been working for a year to get it ready for you.

You can find out all you need to know about Summerfolk at our website summerfolk.org. Links for tickets, performer bios and schedules can all be found there. I hope we’ll see you there.