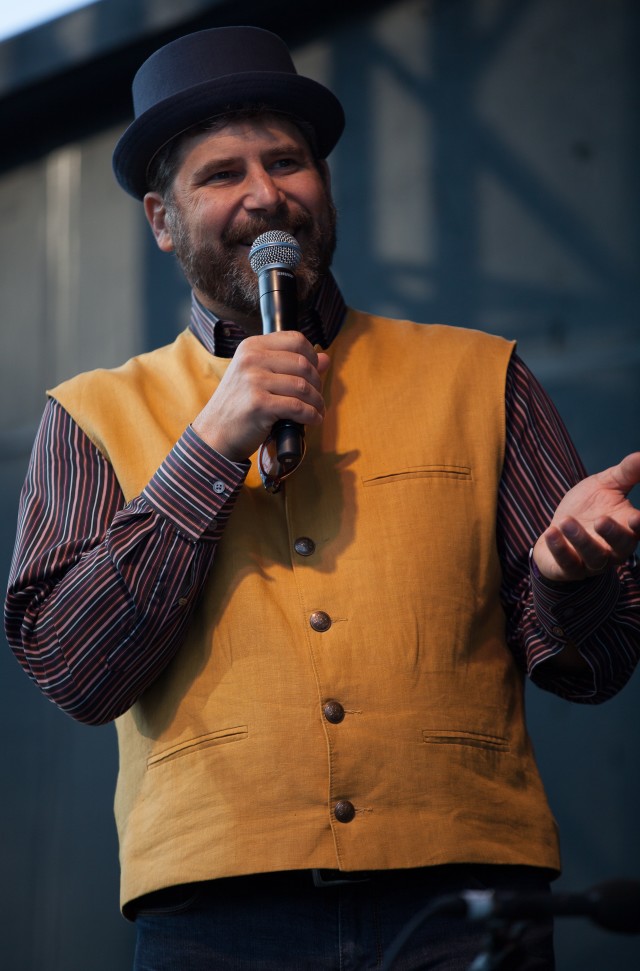 By David Newland
The other day, my teenage daughter confronted me: “Dad, why are you still wearing that t-shirt? It’s ten years old!” I looked down, stunned. “What?! This is my Summerfolk 30th anniversary shirt!” Okay, guilty as charged. But I can explain…

In 2004, I’d been playing as a singer-songwriter in Ontario for a couple of years. Festival gigs were hard to come by. I had played at a Last Chance Saloon for a slot at Summerfolk, and despite many a plastic beer cup raised to my effort, I didn’t get the gig.

I did, however, get a chance to walk through the site at Kelso Park, where so many of my musical heroes had played. Walking among the standing stones with the winter wind whipping off Georgian Bay, I dedicated myself to someday playing Summerfolk.

Elsewhere on the scene, fellow performers and volunteers talked of great moments spent at Summerfolk; of Willie P. Bennett and Stan Rogers; of passionate fans lined up to place their tarps; of late night jams, summer storms and endless encores; of a volunteer corps second to none.

I got invited to play one of the off-season GBFS songwriter series shows, in a lovely theatre above the old courthouse. I stayed in a B&B with a basement vault, a relic of the Prohibition era whiskey trade. At the Tom Thomson gallery, I discovered the painter’s mandolin, a poignant artifact I have made a point of visiting time and again. If I couldn’t play the festival (yet) I could love and admire the place. And I did.

When Liz Harvey-Foulds took over as AD in 2005, she hired some musical friends of mine, and one of them, Jory Nash, asked if I could help out as a volunteer stage host at the Homemade Jam stage. I jumped at the chance. You know the old saying: if you can’t dazzle them with brilliance, baffle them with… hosting. People I’d been listening to for years were playing: Tanglefoot, Rita Chiarelli, Garnet Rogers. I got to sit in on an Ian Tamblyn workshop! I was hooked.

The following year I was back, hosting Down By the Bay. The dream was coming true by tiny increments. Prairie Oyster, Lynn Miles, Crooked Still… I was still a fan, but now I was finding myself backstage with these folks. On Sunday morning I caught the gospel workshop from my canoe, Suzie Vinnick’s voice echoing off the grain elevators.

In 2009, with Richard Knechtel at the helm, I was back with my band, The McFlies. Rocking Down By the Bay, right before Hoots and Hellmouth on the Saturday night, was one of my favourite musical moments ever. The next day, Sharon, of Sharon, Lois & Bram showed up at a kids’ workshop I was hosting and joined me onstage for Skinnimarink. Does it get any better?

It did. In 2011, Richard called again: how about hosting mainstage? Yes sir, I said. Summerfolk was one of seven festivals I did that year with my fiancée by my side, weeks before our wedding. Now I had someone to share all my favourite things with: the steam powered corn cooker, the deep fried turkey legs. The beach and the tipi and the smiling faces now becoming familiar: Pete Miller driving the shuttle van, Ariel Rogers managing the tweeners. Steve and Steve in the CIUT tent. The instrument petting zoo!

In 2012, Summerfolk had a new Artistic Director, and I had a new album. James Keelaghan offered me a night hosting mainstage again, the usual workshop slots and a spot in a brand new venue: the Wine Bar. Now my wife was pregnant and the in-laws were along in support. Summerfolk had become a multi-generational affair in more ways than one: Nathan Rogers (with Dry Bones) took to the stage named after his father, just one among a slew of acts like Chic Gamine, Al Simmons, H’SAO, and my old buddy Dave Gunning. Wow.

Two years later came another call from Keelo, this time with a bold request: would I host all three nights on main stage? On that long-ago winter’s day, all I’d hoped for was the chance to play the festival one day. And now I would be introducing the likes of Laura Cortese, Oh Suzannah, and the incredible Buffy Ste. Marie? Yes, I said. YES!

And now here we are in 2015. Once again, I find myself heading to Owen Sound to host mainstage at Summerfolk. Now, it’s not just heroes, but colleagues and friends I have the honour of introducing: Up-and-comers, the Young Novelists. Ukulele wizard James Hill and the wildly talented Shari Ulrich. Samantha Martin, whose band will simply blow people away. The profound and insightful Evalyn Parry and the passionate and inspiring Digging Roots. The outlandish Steve Poltz and the haunting Sarah MacDougall. Joel Plaskett! Trout Fishing in America! Whitehorse!

So yeah, I’m still wearing my volunteer t-shirt from 2005. It’s not yet holey, but it’s kinda… holy. Still, I may pick up a new one this year. Summerfolk 40? Sounds like a dream come true to me.