When I am not wearing my Artistic Director’s hat, I’m wearing my touring, singer-songwriter’s hat. I’ve been wearing that headgear for over 30 years now. That job takes me to a lot of different places. Last Friday, I was in London, England. Today, I’m typing away in Owen Sound— that’s the nature of the beast.

The performers we bring to Owen Sound come from all points of the compass. Some of those places are small out of the way spots—some from places we see as exotic and some that seem pretty familiar. What unites them is the magic of music and performance.

Traverse City, Michigan seems a lot like Owen Sound. Nestled against Traverse Bay on Lake Michigan, it has a population of about 16,000. Its industrial glory days are in the past and it now counts tourism as its major moneymaker.

It has a thriving arts scene, and we have that to thank for The Accidentals. Katie Larson and Savannah Buist met in 2011 at their public high school.  Katie was a freshman cellist “playing up” in the Philharmonic Orchestra and Savannah was Concertmaster principle violinist. They volunteered for a class assignment that threw them together for their first rehearsal and The Accidentals were born.

They both grew up in musical households that didn’t believe there were types of music, there was just music. You’ll find echoes of jazz, blues, folk and pop in their tunes. They are musical polyglots. In addition to the tight harmonies, edgy violin and cello that define their sound, they also play guitar, b

Between 2011 and 2013, they wrote and recorded two albums. They played as guest artists on several other albums. They scored three films, and landed song placements in several commercials, documentaries and independent films. They did all that while playing over five hundred live shows and maintaining a 3.9 GPA.
In 2014, they added drummer and percussionist, Michael Dause, no slouch himself. It was this trio that I saw in a hotel room at the Folk Alliance International Conference in early 2016. It takes a lot to break out of the crowd at huge music conference. I missed their main showcase, but their talent shone like a great lakes lighthouse in that small space. They are personable, accessible, charmingly nerdy, intelligent and one of the most fun bands that I have heard in a long time.

Mungia is a town near the Bay of Biscay in the Basque region of Spain. The town can trace its history to the early 11th century. Like Traverse City, its population is about 16,000. When Agus Barandiaran was looking for a name for his newly-formed group, he named it after a farmer who used to busk in the town square of Mungia. Korrontzi played trikitixa — the two-row Basque diatonic button accordion.

As a band, Korrontzi celebrates the music of the Basque Country that straddles the Pyrenees in both northeastern Spain and western France. The trikitixa is the heart 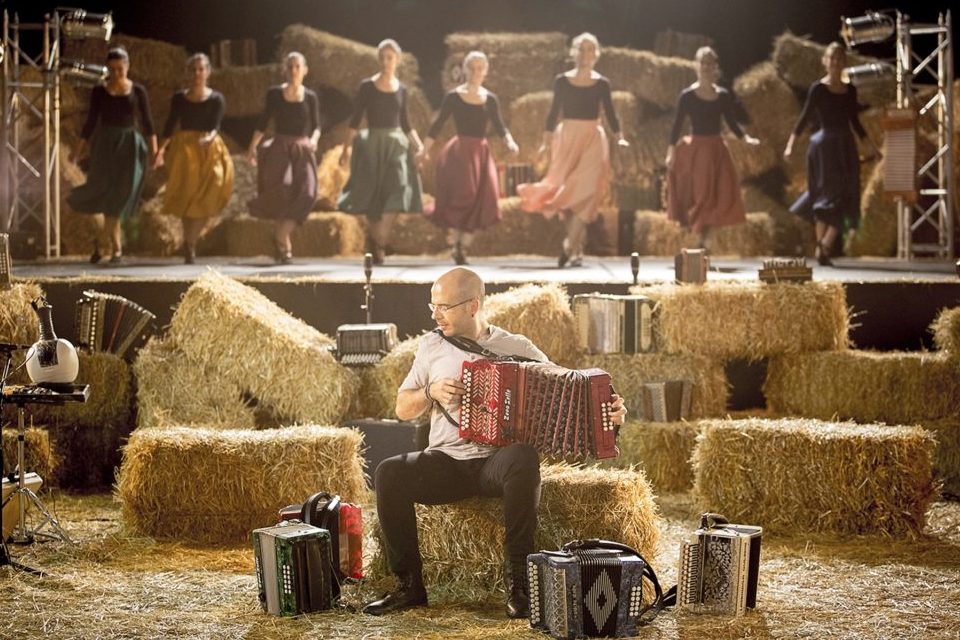 and soul of Basque music even though the accordion entered Basque relatively late. It was brought by immigrants from Lombardy in the nineteenth century. While it has its own distinct accent the music has been influenced by just about every European tradition. The Basque country sits astride the ancient pilgrimage trails to Santiago and the pilgrims have left some fingerprints. It can sound slightly Italian, slightly Celtic but it is always played with intensity and virtuosity by Korrontzi. The band leader, Barandiaran, is a master of the trikitixa and he has surrounded himself with players who lift the music into different planes while maintaining the root and branch of the tradition.

Dance is a big part of any culture’s folk tradition. Korrontzi is travelling with dancers and they will be teaching a workshop at our Down by the River stage ( formerly the Over the Hill stage) on Saturday, August 19. Maybe Basque dance will be the fingerprint Korrontzi leaves on our town.

Traverse City, Mungia — where ever they are from, they are part of Owen Sound at the 42nd annual Summerfolk Music and Crafts Festival. You can find bios and videos of these and other acts, as well as festival information at summerfolk.org.or by following us on social media or just giving us a good old-fashioned phone call at 519-371-2995