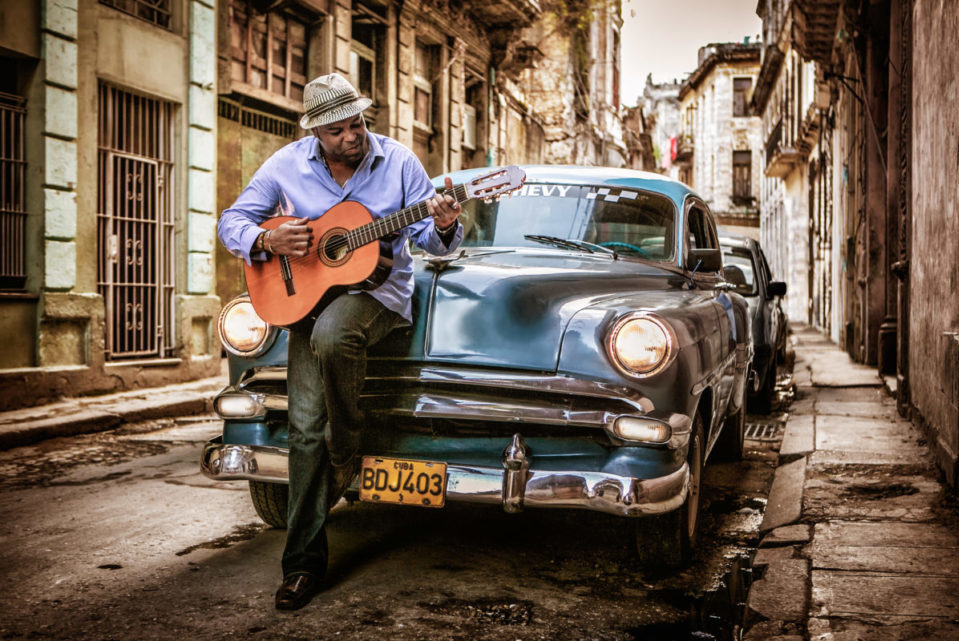 To make my living I have to travel—a lot. While the travelling has some nice moments, it’s not relaxing and it is most assuredly not a vacation. About 10 years ago myself, my wife and my son actually took a vacation. We went to Cuba for a week. I enjoyed the sun, the sand and the general laid back nature of the island, but it was the music that really hooked me. The resort where we stayed, on the Ancon peninsula near Trinidad de Cuba, was far away from the hustle and bustle of Havana or the  non-stop tourism of Varadero. Still, every night there was music at the resort, there was music in town, there was literally music everywhere at all hours.

Latin music has a reputation for being sultry and sensual, but Cuban music takes it to the nth degree. I loved it before I went to Cuba, but I was a fanatic by the time I came back.

When the chance came to book Adonis Puentes for this year’s Summerfolk I jumped at it.

I mentioned in last week’s article that traditional music is important to me. It’s not just the traditional music of my ancestors, though. Traditional music, in all its forms, is the backbone of what I try to book for Summerfolk. I like music that is aware of its history, even if it plays with it some.

We had Adonis’ brother, Alex Cuba, here a few years back. Alex has taken the music of his youth and added contemporary flourishes creating his own Latin pop sound. Adonis Puentes is a traditionalist. They grew up south of Havana in a house that was musically dominated by their father, Valentin, and spiritually by their mother, Maria. By the age of six they were playing guitar, eventually joining their father’s 24 piece travelling guitar ensemble. On days off they found time to jam with some of the greats, among them Ibrahim Ferrar of Buena Vista Social Club fame.

Love brought both Alex and Adonis to Canada, and though they recorded their first cd as the Puentes Brothers, they soon branched out on their own. The quality of their early musical education has seen both of them garnering Juno and Grammy nominations for their work, even while they have charted different musical paths.

Adonis is firmly in the tradition of the soñero—the lyrical, sometimes improvising, singer in a Salsa band. The songs are pure poetry, but the distinctive Cuban rhythms propel the lyric. It’s almost impossible not to dance once the band starts playing. It’s as if the beat channels the song into your entire body. Even if you can’t speak a word of Spanish, you can hear the joy, the love of life and the passion in his voice.

Puentes returns to Cuba often, to touch base and to replenish the creative spark. He feels like he is an ambassador for Cuban music, but can’t really be a proper representative if he is not in touch with the current scene on the Island. There is no doubt that he is a bearer of the tradition—even giants of the genre acknowledge this. He has sung with the likes of Celia Cruz and Ruben Blades. He became lead singer to Los Angeles-based Jose Rizo’s band Mongorama and was thrilled when they earned a Grammy nomination as best tropical Latin album.

Another Salsa great, the legendary Oscar Hernandez, director of the Spanish Harlem Orchestra,  arranged three songs and played piano on his Adonis’ cd Sabor a Café. Oscar Hernandez’s piano solos are such a foundational element in Cuban music that they are taught in Cubas music schools.

Dicen, Adonis Puentes third solo recording project ,was released in March this year in Victoria, where he makes his home. This time produced by Oscar Hernandez, the recording is destined to become a classic of the genre. It’s  a sophisticated mix of elegant balladry and rumbas as sweet as they are sensual. Hernandez’s keyboard and horn charts are the perfect foundation Puentes’ velvety crooning, punctuating his romantic pleas without challenging them. As performed by his acoustic Voice of Cuba Orchestra (guitar, tres, bass, percussion, piano and trumpet), the music makes for lively performances.

Puentes routinely advises audiences to bring their dancing shoes to his shows, and his appearances at Summerfolk will be no exception. We are even arranging for an instructor to teach an afternoon Salas class so you’ll be completely ready to dance the night away.

The Summerfolk Music and Crafts Festival happens August 17, 18 and 19 at Kelso Beach Park. Information can be found at www.summerfolk.org. We hope to see you there. Don’t forget your dancing shoes!