I have a workplace out back of the house. It’s a great little unit that is 8’x12’ on skids with a shed roof. It was dragged into the backyard five summers ago and, after I insulated, drywalled, and put in a floor, it made the perfect backyard office.

I painted the inside south wall of the shed with blackboard paint. That’s where I used to do the majority of the planning for the festival. I was on the road so much this year, that I had to enter the twenty-first century and do it on the lap top.

Depending on how you allocate time, here is what has to be programmed for Summerfolk: eighteen concert slots on the Amphitheatre stage and twelve slots to fill on the Down by the Bay stage in the evenings. There are more than eighty slots to fill over the course of the three days on the six daytime stages. Over forty acts, singly and in groups will occupy those spaces.

A hefty chunk of those daytime slots are workshops that put two or three acts together on a stage, gives them a theme, and let’s them work it out. The model comes from the legendary Estelle Klein and the first Mariposa Folk Festivals. It’s structured to encourage an exchange among the musicians. You let them mix on stage and see what comes of it. Most often it’s magic. 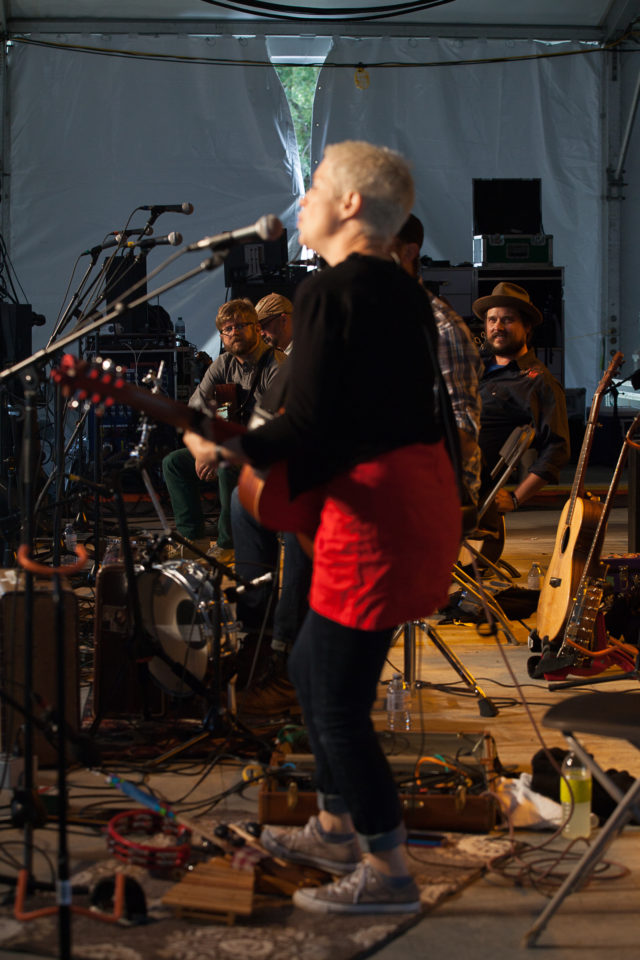 To create interesting workshops, you need the raw materials—great performers and an audience willing to go anywhere with them. We have an abundance of both at Summerfolk.

The best workshop takes into account the personalities of the performers. Knowing how artists are connected to each other is also important. Have they sometimes shared a bass player or a percussionist in the past? Sometimes members of various bands have worked together on recording projects making the magic a little easier to conjure up.

Sometimes the connections aren’t obvious until you dig. Looking through the band lists in the database, I noticed that one is bringing Andrina Turenne as their backup singer. She was a member of Chic Gamine when they played Summerfolk six years ago. One of my all-time favourite vocalists, Andrina knows a boatload of songs so she’s perfect for the ever popular Songs from a Hat on the Saturday afternoon of the festival.

That’s one down, only seventy-nine slots to go…

For many in the audience, the workshop delivers the most memorable performances of the whole weekend.  Anybody who was in the Wine Bar last year for the meeting of Al Simmons and The Harpoonist and the Axe Murderer will swear to that. The workshop took a turn for the surreal as Al scaled the wall of the Amphitheatre to make his exit.

So what have I got in store for you?

I’m looking forward to a workshop called Traditionally Amazing.  I’m putting Vishtèn, the incredible trio from PEI, together with Calan and see what happens when Acadian Traditional meets Welsh Traditional. I’m anticipating some impressive step dancing Friday at 10:30 PM at the Down by the Bay stage.

The Axe Masters workshop with Stephen Fearing, Beppe Gambetta and Joel Morelli is going to be a must-see for people who like hot licks and clever guitar tricks on Saturday at 3:10 in the Gazebo area.

Bryden Gwiss Kiwenzie will be leading a workshop on aboriginal dance, if you’ve ever wanted to know the difference between a jingle dance and a fancy dance. We’ll hope for a round dance as well, since Digging Roots taught us the basics a few years ago. That’s at noon on Sunday at our Down By the River Stage, where the emphasis is on dance all weekend.

Songs from a Hat will be fun as always. Fred Penner, Paige Ballagh, Doug Cox and Andrina Turenne square off against the audience who will challenge the performers to sing at least the first verse and chorus of a song pulled from Treasa Levasseur’s hat. If the pros can’t do it, it’s up to the audience. Past experience has shown that the audience can be very good at this game.

Sarah Harmer, Stephen Fearing, Rose Cousins and Nick Sherman lead a songwriter’s circle on Saturday afternoon. You’ll probably want to get to the Down By the Bay tent early for that one.

I could write all day, but you know, I have to go finish that workshop schedule for you.

Can’t wait to see you at Summerfolk!

Did I make the deadline? Visit www.summerfolk.org to find out. You’ll also find info about ticket prices, bios, videos and links to the performers. Advance ticket prices are in effect until July 31.