There is an extensive intelligence network at Summerfolk. When people ask how I find the acts that make up the roster, that’s what I tell them. Tips come from people about bands they’ve seen. Summerfolk volunteers come back from other festivals with favourites they’d like to see here. At music conferences like Folk Alliance or Folk Music Ontario, directors of other festivals mention must see acts as they pass in the hallway. People email me lists of performers –– it’s never ending and I love it. A vast musical buffet is out there and folks are more than willing to point you to the tastiest dishes.

That intelligence network is also working right now. It’s high festival season and I receive texts like this:

It makes me happy that I booked them.

Michele Law, from the Kingsville Folk Music Festival, mentioned The Kubasonics to me after attending a showcase event in St. John’s—raved about them, in fact. After a conversation about them with Mariposa’s artistic director, Liz Scott, I decided to take a chance based on what I was hearing from people I trusted—I’m also a sucker for Ukrainian music.

The Kubasonics’ promo proudly states, “ They are arguably Newfoundland’s finest Ukrainian band”. I won’t dispute it. They were voted the “Best Band to See Live” in Newfoundland. Think about that for a second. Best live band—in Newfoundland!

Known for their high energy shows and playing on a dizzying array of exotic traditional instruments—the tsymbaly, a kind of hammered dulcimer, the drymba and the hurdy-gurdy, they round it out with more familiar ones—accordion, violin, bass and guitar.

The music is from the Ukraine and the Ukraine is a big place. Band founder, Brian Cherwick, describes their style this way, “Ukrainian music comes in many genres. Some of it is the fast dance music, like the type we often play, but much of it is complex lyrical music. We play that from time to time as well. There are some distinctive scales and modes that are used—often the minor sounding ones—that are a bit different from what we usually hear in other music. There are also some unusual rhythmic patterns. And, to state the obvious, I guess the fact that the words are in Ukrainian would make it different too.”

Though they appear to be new on the scene, this is just the latest version of the band. Originally formed in Alberta in 1996, The Kubasonics enjoyed some success and had a devoted following touring across Canada and Europe. When Brian Cherwick moved to Newfoundland in 2011, the Kubasonics went on hiatus.

In 2015, Brian reconstituted the band. Three-fifths of the band are Cherwicks—Brian is joined by Maria on violin and Jacob on Drums. The roster is rounded out with a couple of great Newfoundland musicians, Darren Browne on guitar and Matt Hender on bass.

The intelligence network is one way of finding bands. Sometimes though, the bands come to you all by themselves. Back in January, we held an open audition for Summerfolk and Polky Village Band travelled from Toronto to participate. It’s not a stretch to say that they were the hit of the afternoon. What made it great was that they were so unexpected. 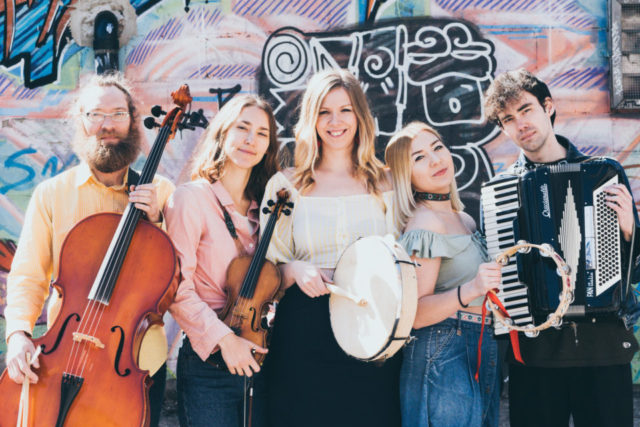 Their music is Polish—energetic and played in a traditional fashion. The capacity crowd in the Heartwood Music Hall took to them like a house on fire. Polky Village Band received the only standing ovation of the afternoon. Pleasantly surprised, but I shouldn’t have been— Summerfolk audiences love music that is authentic.

Polky Village Band was formed by two Polish women—singer, Ewelina Ferenc and dancer, Ala Stasiuk. When they met in Toronto, they realized that there was a shared passion for the unique and enigmatic style of Central and Eastern European folk music. Eager to share the music and dance learned when growing up, they found some equally incredible Canadian musicians—Georgia Hathaway on fiddle, Matti Palonen on cello and hammer dulcimer, and Tristan Murphy on accordion and pocket trumpet—and Polky Village Band was born!

Both The Kubasonics and Polky Village Band will take the stage at Summerfolk this year. In addition to concert slots and workshops, both bands will present dance workshops at our Down By the River stage.

The Summerfolk Music and Crafts Festival happens August 17,18,19 at Kelso Beach Park. Information is available, with no need of a spy network, at summerfolk.org.